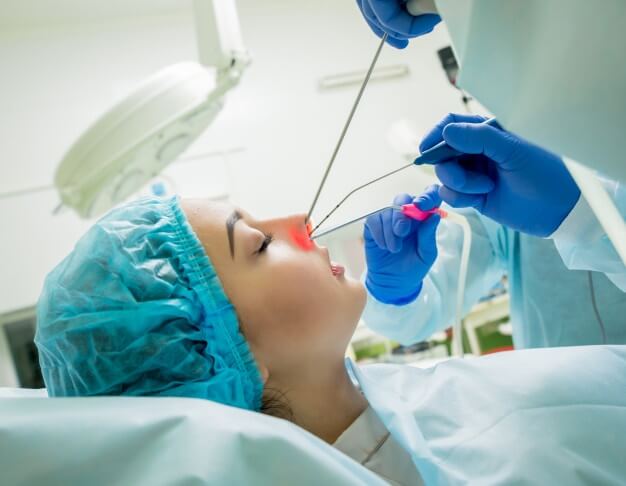 Sinusitis is a condition where the nasal sinuses or passages swell up. It is also sometimes known as sinus infection. A person with sinusitis may have a stuffy nose with a thick and discoloured nasal flow and post nasal drip with odour, feel pressure around the nose, eyes or forehead, head congestions and headaches, experience coughs and blocking in ears affecting hearing.  It can also include things like nasal polyps that are swellings of the nasal lining inside the nasal passages and sinuses.  The person feels extremely uneasy and weak at times.

The need for Sinusitis surgery

Sinus surgeries are mostly required to open the pathways of the sinuses and clear blockages. It may include removing of thin pieces of bones, mucous membranes, swollen or damaged tissues or tumours.

People suffering from ongoing or recurrent sinus infections, inflammations in sinuses or with abnormal growths in sinus and structure of sinus can go for surgeries. It is done with little discomfort and there are few complications.

Functional endoscopic sinus surgery (FESS)– A tool called the endoscope is used in this procedure. The endoscope is inserted into the nasal passages to reach the sinuses opening. The surgeon uses micro telescopes and surgical instruments to remove the obstructions. The surgery is done through the nostrils leaving no scars. Swelling is temporary. This is a frequently used type of surgery.

Image-guided surgery– it is recommended for severe sinusitis cases. A three-dimensional mapping system is used here with the help of CT scans and infra red signals. It guides the surgeon to difficult nasal passages to help remove blockages or outgrowths. It is a more invasive kind.

Caldwell-Luc operation– It removes growths and improve sinus drainage by creating a pathway between the nose and the cavity beneath the eye called the maxillary sinus. A cut is made in the upper jaw, above one of the second molar teeth inside the mouth to enter the sinus cavity through which the surgery is performed under local or general anaesthesia.

After sinus surgery, a sterile gauze-like material is inserted into the nasal passage to control bleeding. T he type of packing depends on the kind of surgery done. The recovery period differ from person to person and depends on age and general health. Medications are prescribed during the recovery and patients may experience mild discomfort, fatigue, nasal congestion and little bleeding after the operation.

The complications that can arise during or after sinus surgeries are mostly rare. Few may experience:

Before going into surgeries, many doctors might want to treat it with other solutions. There are a number of medications that may be prescribed to improve the situation. These other treatments may include antibiotics, nasal saline rinses or sprays, nasal decongestant sprays, nasal steroid sprays, oral steroids, allergy medications and antihistamines.

Sinusitis surgeries are not quite complicated and can be opted for if symptoms suggest so. Consultations with the doctor can help to decide.

You may also read : Difference Between Migraine And Headache!